Mrs. Romphf completed her Bachelor's of Music in Secondary Music Education at the University of Victoria graduating with distinction (Piano and Voice).  She also completed her Master's of Music majoring in Instrumental Conducting from the American Band College of Sam Huston State University (Texas).  Mrs. Romphf is the founder of the National award winning adult community choir the Vancouver Island Chamber Choir.  She is currently the  Past President of the B.C. Music Educator's Association (BCMEA - the Music Educator's Specialist branch of the BCTF).  Mrs. Romphf is also the 2014 recipient of the "Fine Arts Champion Award" from the VCPAC.  She is also playing French Horn with the Greater Victoria Concert Band and also plays tenor sax, keyboard, and back up vocals for the Bobby Dazzler Band. 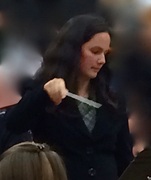 Mrs. McKnight completed her Bachelor’s of Music in Secondary Music Education at the University of Victoria graduating with distinction.  Mrs. McKnight specializes in choral music having sung in honor choirs and traveled internationally to choral festivals from the age of eight. She also studied strings for 12 years, beginning with the violin at age 3 and later the double bass.  Mrs. McKnight is the founder and director of a local vocal jazz ensemble, Vocal Jazz Expressions.  She is also highly involved with the district’s honor ensemble, Island Ukuleles and founded the “Little Ukers” program.